It took over a month, but there were Christmas and a period (well, two) of general sickness at my home. And there was a bug that was leading to crashes, I got dozens of reports and couldn't figure out the reason. Couldn't even repro it. Until yesterday. The game was allocating memory, was marking it to be freed, but never managed to, well, find some time to actually free the memory. This is fixed now. And I added a bunch of tools that will help me to find such issues in the future.

With this build, the persistence layer is introduced to the game.

And a new hub, a place where you set up your gear, unlock things, change world settings, view statistics. Now it's surrounding you. The game requires freedom of movement anyway, right? 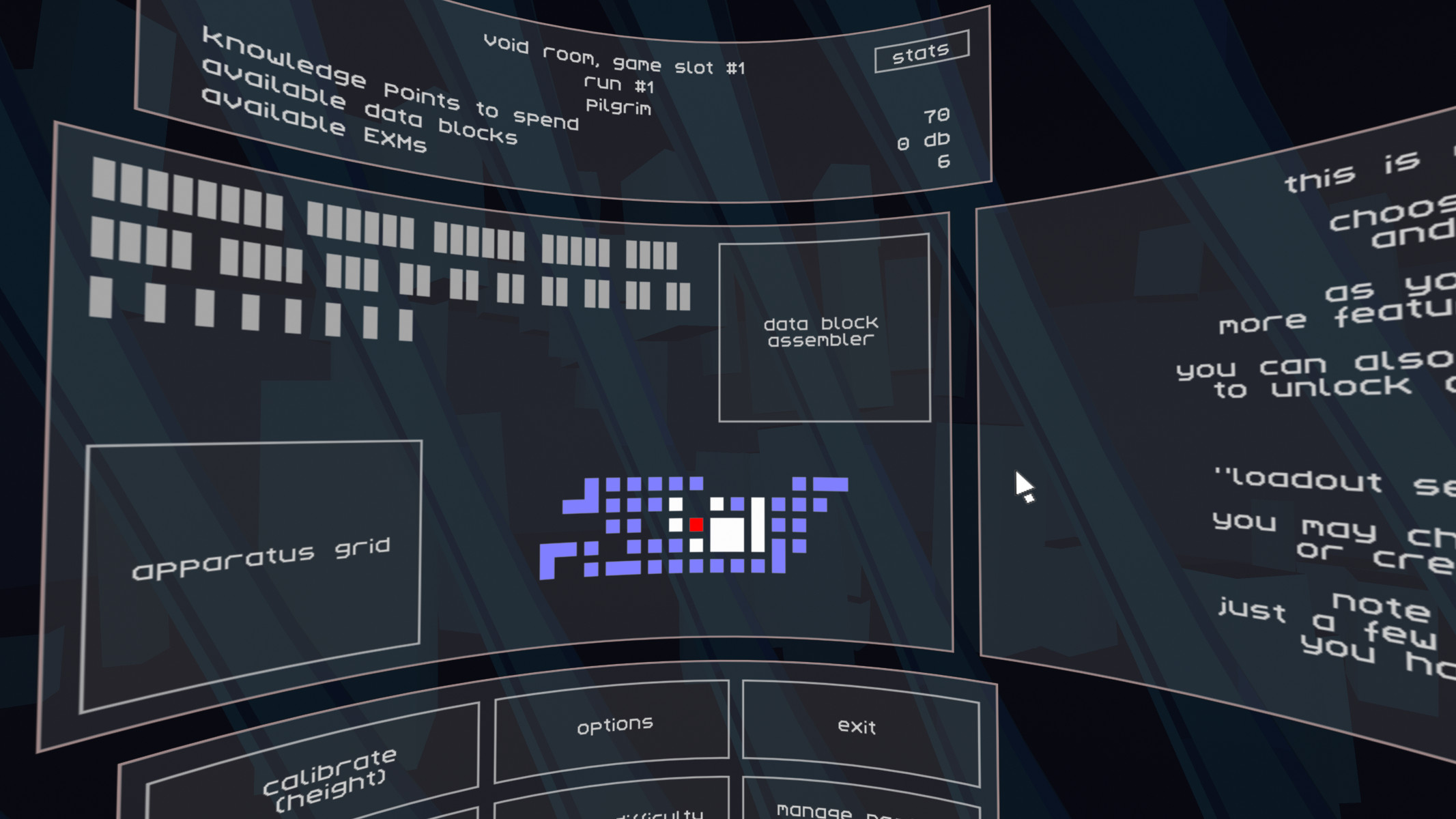 When you create a new game slot (or a profile) you will be introduced to a simplified version. There will be just an information window and another one to start a run.

Only after specific things happen, more options will become available. This should help a bit with the overwhelming feeling people may get when first launching the game and seeing lots of windows around them. Layout manager also may get a bit simpler with fewer EXMs available when you start the game. But only after tutorials are added, it should be much easier to understand things.

The overall idea for persistence is simple. Gather resources by doing runs and with these resources unlock things to have more weapons, devices, better stats. But there are a few more things that are not in the build but I'd like to describe here.

But first things first, let's talk about unlocking. How to do that. Right now there is just one solution. The one that I wanted to have. In the next build, I plan to add simplified persistence, that will just grant you data blocks for gathering knowledge/experience points. But this is going to be included in the next build, so let's focus on the current approach.

I'll break it down into a few points. Mind that I don't mention here how do they fit into the lore. For this, there will be a better time to explain it.

And that's it. Well, almost. There are some nuances that will be covered in tutorials but that I'd like to mention here as well. 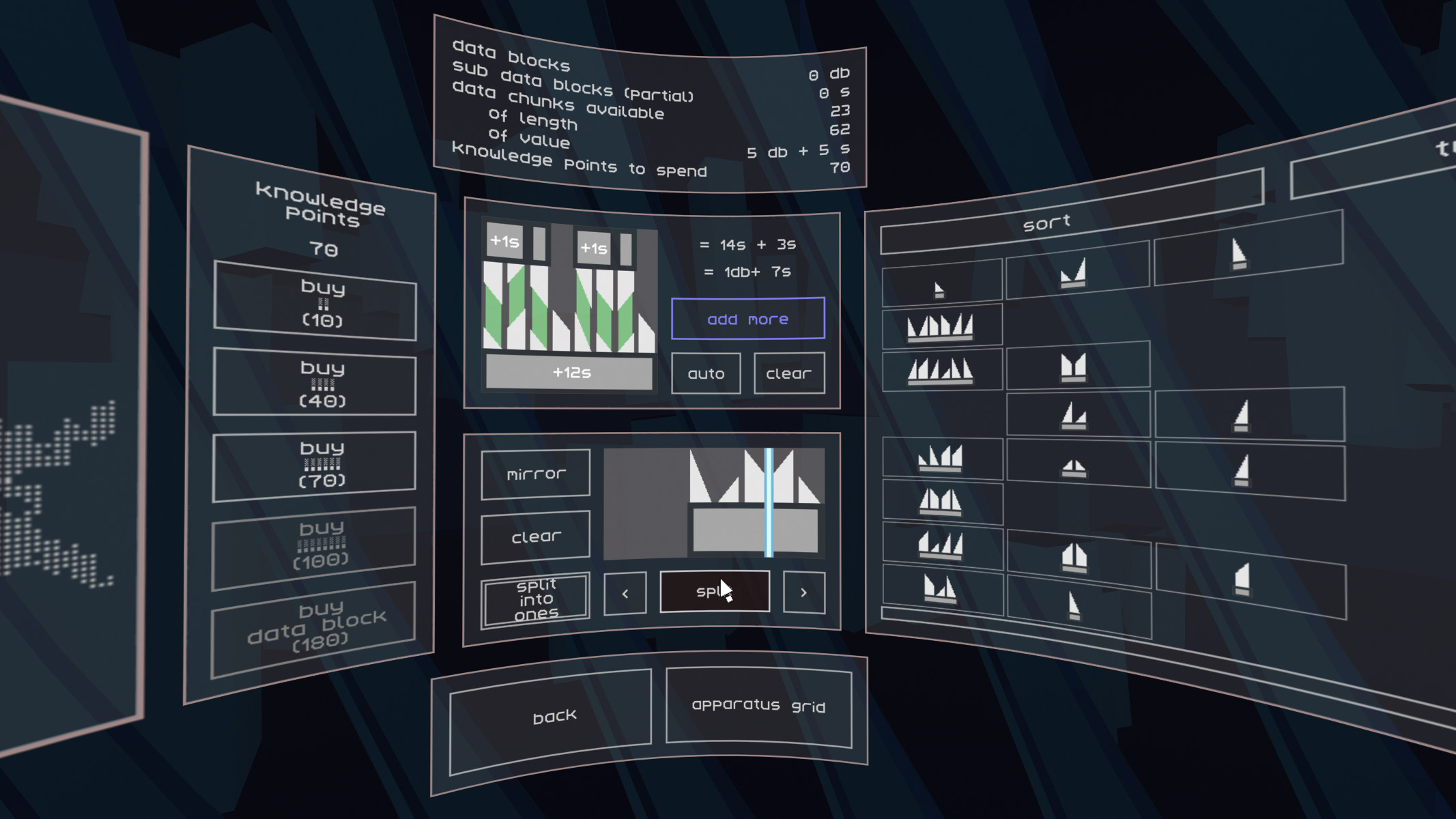 Data Block Assembler itself is my love letter to old 8-bit games in which you were collecting stuff and had mini games to rearrange that stuff into something else. Two games that I spent most time were Tau Ceti and Impossible Mission. With Tea For God, I didn't want to have a set number of all data blocks. Data chunks are randomly generated and I tried various sets of shapes to make something that is a bit challenging but doesn't get completely bonkers with all possible ways of combining data chunks, as this would make the player just split everything into single elements (which are worthless by the way). 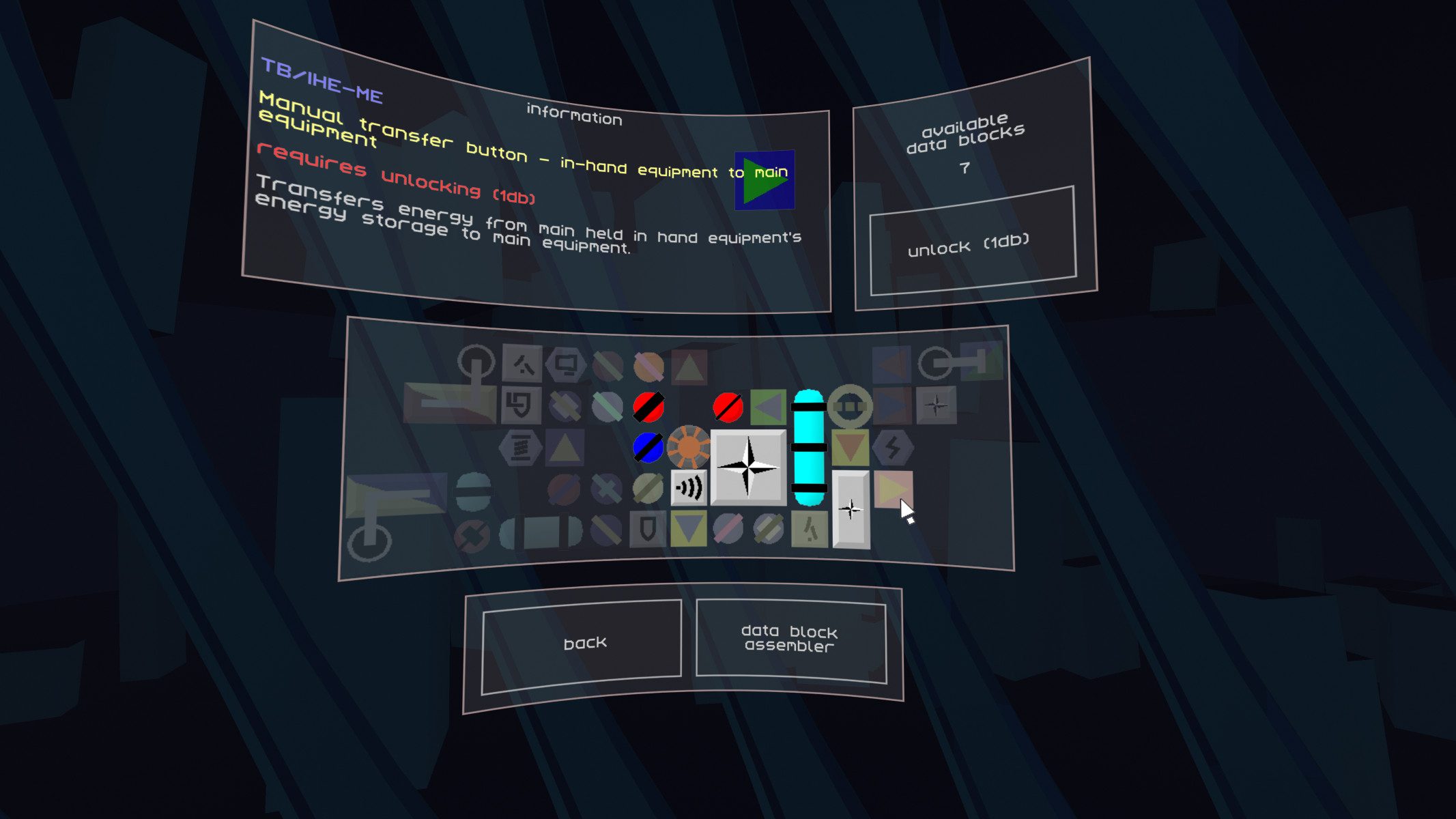 Second thing is that while most of the things you unlock are EXMs, there are going to be other upgrades available. I'd like to add elements that are story related. Although one of my worries here is that if not handled properly, this may feel like a mandatory grind. I will try to avoid that. For time being there is just one non EXM thing to unlock. Grid Skip that when unlocked, allows reaching for further EXMs to unlock. With a small number of EXMs available, it makes little sense in using it, but when the grid gets larger (and I plan to make it really large), it will be much more useful. It should also help with grind issue. All those extra unlocks will be permanent and won't require equipping (contrary to EXMs). I'd like to also get sets of weapon parts that you can unlock. Most of the parts you find on the way will be randomly generated, except those unlockable "boxes". The content of these boxes will be known upfront, so you know what you're getting.

To test Data Block Assembler, you may just play the game and gather data chunks or... you may choose to use Cheat Menu to get yourself a bunch of Knowledge Points.

Have fun and tell me what you think about it.

Next? Already mentioned simpler unlocking mechanism. Then hand tracking for Quest (which is quite amazing, it is something I expected from Index controllers). And then tutorials. Hand tracking itself may require some tutorial, as with usable EXMs or even equipping main guns you will need specific gestures to perform.

I still have no idea how to add specific gestures that I plan for stuff that is coming after weapon crafting. I'll have to figure that one out eventually. I love the fact, that many times when I write about an issue, I am coming with an idea how to deal with it. I think that it might work.

Wow, this really expands the game a lot. I got that retro game feeling as soon as I saw the screenshots above; then you mentioned Impossible Mission, and everything clicked into place. :D

Initially it was going to resemble Tau Ceti unlock system much more. Almost 1:1, but I realise that Tau Ceti had limited number of rods to complete and they were not crucial for the gameplay itself (same as Impossible Mission). That's why I decided to allow to have different lengths of pieces and to split them. I am happy with how it works now - that it allows you to make the things much easier by splitting into the smallest pieces but then you get less value. I tried more variations but then it was hard to match anything. I will be trying out different sets to check if then it is easier to get larger matches.

Keep up the great work. This concept is certainly unique and incredibly interesting.

I look forward to testing the unlocking system.

Thank you :) I'd be grateful if you'd share what you think of it.

Note that there are a few things coming, as it is all work-in-progress:

1. I will be adding simplified unlocking, where you don't care about data blocks, data chunks and knowledge points. You just gather KP and they are automatically converted to data blocks. No Data Block Assembler.

2. I will be adding means to organise EXM grid a bit. But that's when more EXMs are in the game.

So after playing only a few hours with my buddy, we really enjoyed the data block assembly. It quickly made sense and became an enjoyable puzzle. It was a compelling system and something we want to delve deeper into.

The unlocks made the EXMs a lot less daunting as well.

I do recognize it is somewhat complicated however. Maybe a tutorial that explains exactly how to make the shapes match up properly would go a long way to make the system clearer.

I expect that without tutorials, only a bunch of people will get into the unlock system. If you know what's going on there, you start having fun (and you realise that sometimes it is better to wait for better pieces to get higher value). Tutorials are coming quite soon. They'll be explaining bits of the game. I also want to introduce a system that suggests tutorials to check out (if you have a few data chunks and haven't tried Data Block Assembly, it will point to that tutorial, if your reactor run out of energy, you'll have a tutorial about that and so on).

Also, I'll be adding filters to Apparatus Grid to make it easier to find EXMs you want to unlock. I'd like the grid to be much much larger.

Would you be interested to help build the most basic version of your wild room generating program for WebXR and open source it so people can build levels in WebXR? The Oculus Quest play space is exposed to the web so that's a start.

Not at the moment I'm affraid :( I might help with just describing how I do that, what to avoid, what to use, etc. But it still changes and I'd prefer to focus on delivering the game.